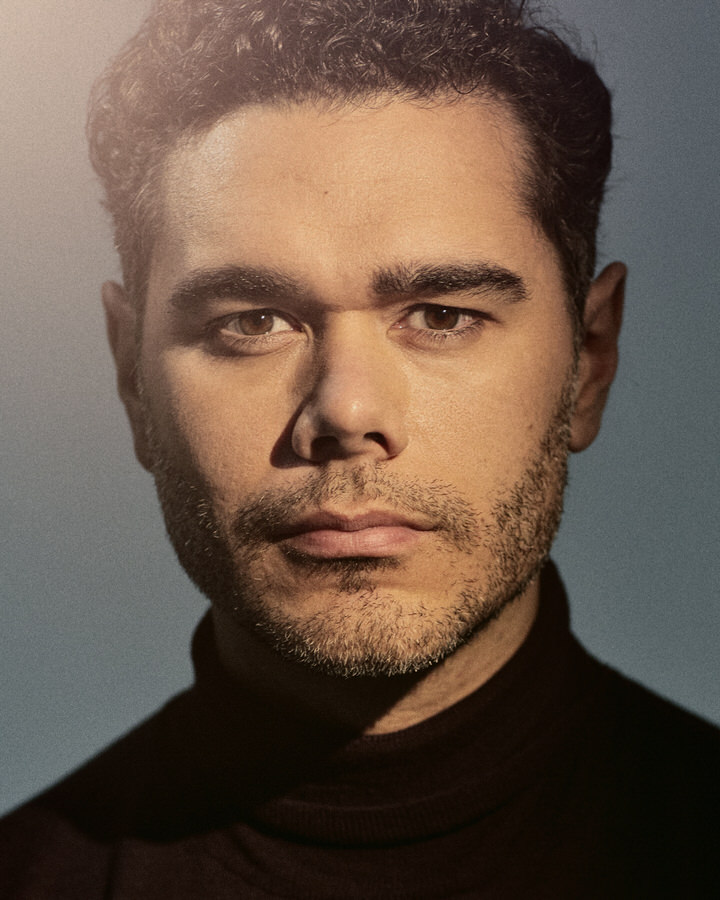 Canadian Grammy® Award-winning baritone, Elliot Madore has established himself as one of the most sought after, accomplished singers of his generation, enthralling audiences around the world with his “robust singing and take-no-prisoners acting” (The New York Times), “exquisite vocal beauty” (Opera News) and “movie star good looks” (Merkur). At just 35, Madore’s career spans the past decade, singing in major opera companies and orchestras throughout Europe, the United States and Canada.

The 2022 – 2023 season sees Mr. Madore’s return to the Los Angeles Philharmonic to sing Ramón in a semi-staged production of John Adams’ Girls of the Golden West, as well as his much-anticipated debut with the Toronto Symphony Orchestra to sing Messiah under the direction of music director Gustavo Gimeno. With the Seattle Symphony, Mr. Madore will be performing The Buddha in Tan Dun’s production of Buddha Passion conducted by the composer himself. In this new season, Mr. Madore also sings the baritone soloist in Carmina Burana in a special co-presentation by the Hong Kong Philharmonic and the Hong Kong Ballet, as well as with the Chicago Symphony Orchestra conducted by Osmo Vänskä, the New World Symphony Orchestra conducted by Patrick Dupré Quigley, and the Oregon Symphony Orchestra conducted by Leo Hussain. Mr. Madore will debut as The Captain in John Adams’ The Death of Klinghoffer with the Radio Filharmonisch Orkest at the Royal Concertgebouw. In addition, Mr. Madore makes his house debut at the National Arts Centre in the title role of Don Giovanni and his role debut performing Brahms’ Requiem with the Kalamazoo Symphony. Mr. Madore continues his position as a performing Associate Professor of Voice with the Cincinnati Conservatory of Music faculty.

The 2020-2021 season was set to see Mr. Madore’s scheduled return to The Metropolitan Opera to sing Mercutio in the Bartlett Sher production of Roméo et Juliette. Mr. Madore was also scheduled to sing the role of Franz Wolff-Metternich in the world premiere of La beauté du monde at Opéra de Montreal, and was scheduled to return to both Opernhaus Zürich and Manitoba Opera to sing Anthony Hope in Sweeney Todd. Scheduled orchestral engagements include his debut with the London Symphony Orchestra singing Carmina Burana, conducted by Gianandrea Noseda, Ramón in Girls of the Golden West with the Los Angeles Philharmonic, and Vaughn Williams’ Sea Symphony with the ORF Radio Symphonie Orchester Wien. Mr. Madore appeared in recital at Koerner Hall at the Royal Conservatory of Music in Toronto. And at the Opéra Orchestre National Montpellier, he sang the role of Denis in Philip Venables’ Denis & Katya.

Elliot began the 2019-2020 season with a Kennedy Center debut in Carmina Burana with the National Symphony Orchestra conducted by music director Gianandrea Noseda followed by returns to Florida Grand Opera for the title role in Don Giovanni and to The Metropolitan Opera for Schaunard in La bohème. Mr. Madore was scheduled to debut at Calgary Opera as Harlekin in Ariadne auf Naxos. Additional debuts would have included Chicago Symphony Orchestra for Carmina Burana conducted by Alain Altinoglu and Cincinnati Symphony for Adams’ El Niño and Estevez’s Cantata Criolla conducted by Juanjo Mena.

Elliot Madore returned in the season 2018-2019 to the Dutch National Opera in the European premiere of John Adams’ Girls of the Golden West directed by Peter Sellars, a role he premiered at the San Francisco Opera in the 2017-2018 season. He also returned to the Zurich Opera in a new production of Sweeney Todd as Anthony Hope and debuted as Figaro in Il barbiere di Siviglia at Manitoba Opera. He sang Carmina Burana with the Kalamazoo Bach Festival, Kitchener-Waterloo Symphony, and Colorado Symphony having previously sung it with the Cleveland Orchestra.

In the 2017-2018 season, he returned to the San Francisco Opera for the world premiere of John Adams’ Girls of the Golden West directed by Peter Sellars and the Zurich Opera as Germano in La scala di seta. He debuted with the Berlin Philharmonic as The Cat/Grandfather Clock in L’enfant et les sortilèges conducted by Seiji Ozawa, with the Bremen Kammerphilharmonie in Pelléas et Melisande conducted by Mirga Gražinyte-Tyla, and with the Los Angeles Philharmonic singing Papageno’s arias with Gustavo Dudamel. He returned to the Tanglewood Music Festival where he sang Bernstein’s Songfest with the Boston Symphony Orchestra.

In his signature role of Pelléas in Pelléas et Melisande, he made his Bayerische Staatsoper debut in a new production at the Prinzregententheater. He has also sung Pelléas with the Croatian National Opera in Stéphane Braunschweig’s famous production, with Franz Welser-Möst and the Cleveland Orchestra in a fully-staged production by Yuval Sharon, at Opéra-Théâtre de Limoges, and with the Sydney Symphony Orchestra under Charles Dutoit. Mr. Madore made his Metropolitan Opera mainstage debut as Lysander in their original baroque fantasy The Enchanted Island conducted by William Christie, as well as singing the Novice’s Friend in Billy Budd as a member of Lindemann Young Artist Development Program. Since then, he has appeared as Figaro in The Barber of Seville and Mercutio in the new production of Roméo et Juliette conducted by Gianandrea Noseda which was broadcast worldwide in HD. He made his San Francisco Opera debut as Anthony in Sweeney Todd and returned to the Bayerische Staatsoper as Harlekin in Ariadne auf Naxos under music director Kirill Petrenko with performances in Munich and at the Théâtre des Champs-Elysées in Paris. He debuted at Lyric Opera of Kansas City as Belcore in L’elisir d’amore, Florida Grand Opera debut as Reinaldo Arenas in Jorge Martin’s Before Night Falls, and at the Santa Fe Opera as Mercutio in a new production of Roméo et Juliette conducted by Harry Bicket. He also debuted at the Dutch National Opera as Prince Hérisson de Porc-Epic in Laurent Pelly’s new production of Chabrier’s L’étoile which was recorded for DVD.

In 2012, he made his European operatic debut at the Glyndebourne Festival in a new production of L’heure espagnole as Ramiro and L’enfant et les sortilèges as The Cat/Grandfather Clock directed by Laurent Pelly and conducted by Kazushi Ono. He was also seen in this same Ravel double-bill at the Saito Kinen Festival conducted by Seiji Ozawa and directed by Laurent Pelly which recently won a Grammy Award for Best Opera Recording. He made his Salzburg Festival debut as the Japanese Envoy in concert performances of Stravinsky’s Le rossignol with Ivor Bolton and Mozarteumorchester Salzburg. At the Tanglewood Festival, Mr. Madore has been seen as Harlekin and the Music Master in Ariadne auf Naxos under the baton of Christoph von Dohnányi. He returned to the Glyndebourne Festival as the title role in Mozart’s Don Giovanni, a role he also sang at Opera Philadelphia, Opera Theatre of Saint Louis, and at the Tanglewood Festival with James Levine. Elliot was a member of the ensemble at Opernhaus Zürich where he was seen as Valentin in a new production of Faust, Guglielmo in Così fan tutte under Tomas Netopil, Schaunard in La bohème conducted by Nello Santi, Andrei a new production of Peter Eötvös’s Three Sisters, Silvio in Pagliacci, Silvano in Un ballo in maschera and Harlekin in Ariadne auf Naxos under Fabio Luisi.

In concert, he opened the new Philharmonie Hall in Paris with Les Arts Florissants as Adario in Rameau’s Les Indes galantes conducted by William Christie. He made his Baltimore Symphony debut with Marin Alsop in Carmina Burana, was heard in concert with Charles Dutoit and Orchestre de la Suisse Romande in L’heure espagnole and L’enfant et les sortilèges, and debuted with the Houston Symphony Orchestra in Carmina Burana under music director Andrés Orozco-Estrada. He was heard in recital with the Cleveland Art Song Festival and with Music Toronto, which was broadcast on the CBC. Mr. Madore has also recently performed recitals in New York, Winnipeg, and Philadelphia. He made his Carnegie Hall recital debut at Weill Recital Hall as part of Marilyn Horne’s The Song Continues series and performed a solo concert with the Edmonton Symphony in a program of opera arias and Lieder. His Canadian recital debut took place at the National Arts Centre in Canada which was recorded and broadcast on the CBC Radio Two’s “Next! Canada’s Music Future” Series.

In addition to the Metropolitan Opera National Council Auditions, Mr. Madore was the recipient of the 2010 George London Award for a Canadian Singer from the George London Foundation, a finalist in the 2010 Eleanor McCollum Competition for Young Singers in Houston and the recipient of the ARIAS Emerging Young Artist Award from Opera Canada. He was also the winner of the 2009 Palm Beach Vocal Competition. Elliot Madore is a graduate of the Curtis Institute of Music where he studied with Marlena Malas.

This website uses cookies to improve your experience while you navigate through the website. Out of these cookies, the cookies that are categorized as necessary are stored on your browser as they are essential for the working of basic functionalities of the website. We also use third-party cookies that help us analyze and understand how you use this website. These cookies will be stored in your browser only with your consent. You also have the option to opt-out of these cookies. But opting out of some of these cookies may have an effect on your browsing experience.
Necessary Always Enabled
Necessary cookies are absolutely essential for the website to function properly. This category only includes cookies that ensures basic functionalities and security features of the website. These cookies do not store any personal information.
Non-necessary
Any cookies that may not be particularly necessary for the website to function and is used specifically to collect user personal data via analytics, ads, other embedded contents are termed as non-necessary cookies. It is mandatory to procure user consent prior to running these cookies on your website.
SAVE & ACCEPT